What is a Disaster Base hospital?

A base hospital for disaster management is a medical institution that has advanced medical functions to provide life-saving medical care for serious emergency patients with multiple traumas, contusion syndrome, extensive burns, etc., which occur frequently in times of disaster, has the ability to receive seriously injured patients from the disaster area, and has a system for dispatching Disaster Medical Assistance Teams (DMAT).

The team consists of doctors, nurses, business coordinators, medical staff other than doctors and nurses, and administrative staff, among others. It is a specially trained medical team with the mobility to operate within approximately 48 hours in the acute phase after a large-scale disaster or mass-casualty accident with many injured or sick people that cannot be handled by the local medical system alone. The hospital has two teams and the team members are trained to respond to large-scale disasters not only in Ibaraki Prefecture but also in other prefectures while performing their daily medical duties. 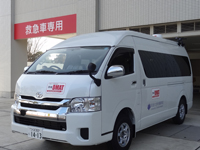 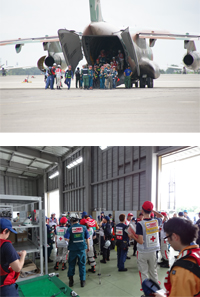 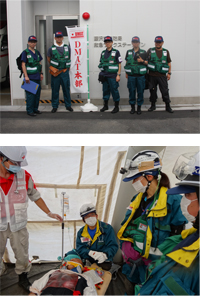